Advise and Consent   [1962]
Directed by Otto Preminger
Initial sketches for these opening titles, (shown at bottom here), gave way to a tighter motif of the visual pun of "taking the lid off" the Capitol building, illustrating in a single quick animated image the essence the story tells about shenanigans in the US Congress.
The filmed flag, waving in glorious slow motion as a background to the signature-style handwritten credits that follow, helps to express that though Bass's hand-drawn images frame the opening with a sardonic cartoon, the plot itself is serious and though fictional, is all too believable. 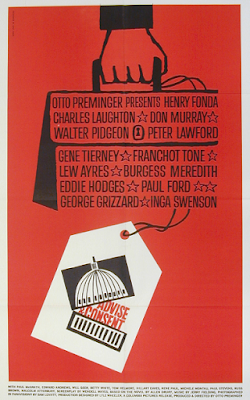 Initial sketches by Bass show ideas about politicians and the seat of American government being "puppets on a string" and wind-up toys controlled by others. The eventual choice that Preminger and Bass made together, to use the simpler, less literal and eye-winking imagery gave us the more immediate and stronger work.

Posted by Benjamin Marcus at 7:55 PM

JLTR said...
This comment has been removed by the author.
8:02 PM